Almost every piece of software has some sort of version. Whether it's a nice-looking SemVer string or a simple timestamp, being able to distinguish one version from the other is important. elmah.io supports sending version information from your application in every message logged in two ways:

Version Numbers on the UI

Let's start by looking at how version numbers are represented in the elmah.io UI. Every message contains a version property as illustrated below: 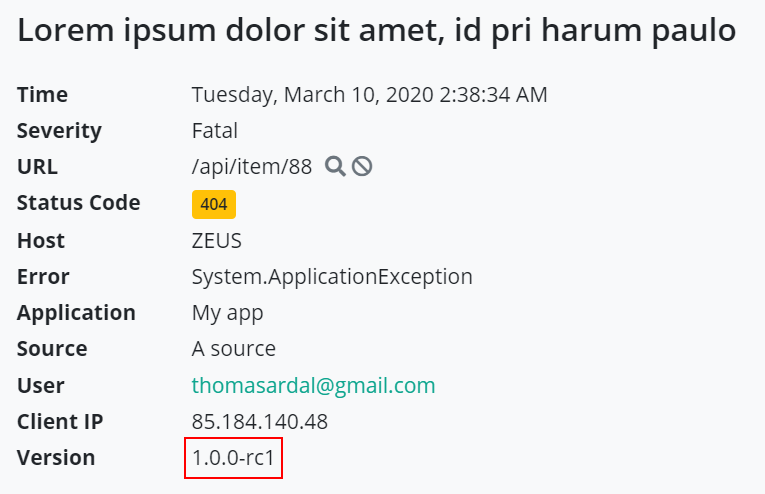 This way, you will be able to see which version of your software that logged each message.

Having the version number on the message opens up some interesting search possibilities. Imagine that you want to search for every message logged by 1.0.* versions of your software, including release candidates, etc. Simply search in the search box like this:

How you choose to represent version numbers in your system is really up to you. elmah.io doesn't require SemVer, even though we strongly recommend you to use it. Version is a simple string in our API, which means that you can send anything from SemVer to a stringified timestamp.

Adding a version number to every message logged in elmah.io is easy as 1-2-3. If you're using our API, there's a property named version where you can put the version of your application. Chances are that you are using one of the integrations like ELMAH, log4net, or Serilog. There are multiple ways to send a version number to elmah.io.

You probably want to attach the same version number on every message logged in elmah.io. The easiest way to achieve that is to create a global event handler for the OnMessage event, which is triggered every time the elmah.io client logs a message to elmah.io:

If you're logging errors to elmah.io in catch blocks, logging the version number can be done using a similar approach to the above:

In this case, the code at this point doesn't know anything about elmah.io. Luckily, there's an alternative to the Version property, by putting a custom element in the Data dictionary on Exception. The exact name of the key must be X-ELMAHIO-VERSION for elmah.io to interpret this as the version number.

log4net supports the concept of customer properties in various ways. Since log4net properties are converted to custom properties in elmah.io, the easiest way to add a version number of every message logged through log4net is by configuring a global property somewhere in your initialization code:

The property name is equal to the custom element we used in the last section.

log4net supports custom properties in the context of a log call as well. To do that, put the X-ELMAHIO-VERSION property in the ThreadContext before logging to log4net:

The elmah.io NLog target can use the OnMessage action:


This article was brought to you by the elmah.io team. elmah.io is the best error management system for .NET web applications. We monitor your website, alert you when errors start happening, and help you fix errors fast.